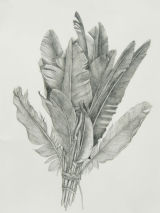 Four Bones and a Feather 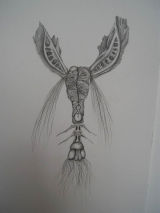 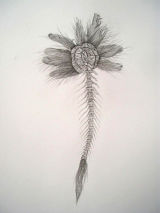 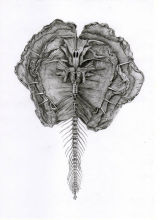 The Goose Feather Bouquet references the roadside flowers that evidence human tragedy, loss and mourning. The feathers were discovered in a mass beside a lake and obviously marked a place where a goose’s life had been lost. I brought them together into a sculptural piece, which I then used as a subject for a drawing. ‘Cocoon’ is also a drawing of a sculptural piece, and ‘Four Bones and a Feather’ is drawn from an assemblage.
I am interested in the presentation of my ideas in both the material form –the sculptures, and as drawings, and the different experiences that these different forms invoke. In presenting drawings of my sculptures rather than the sculptures themselves I divorce the image from the materiality of the object which can then introduce an element of questioning, for instance in the case of ‘Cocoon’ the exact nature of the object is undecipherable.
In drawings such as ‘Goose Feather Bouquet’ and ‘Three Bones and a Feather’ I attempt to imbue the subjects of my drawings with more power than they might normally appear to possess. Thereby elevating these objects to the position of respect which I believe they should occupy, as symbols of life and also essential constituents of life.

Specimen drawings: the style of these drawings recalls the traditional means of recording specimens –botanical illustration. By applying this style to the subjects of my drawings I make reference to the interface between science and art, and imply that the specimens have, at some time in the past, been discovered, or perhaps been bought into being from another world. Perhaps it is to be expected that within the current arena of a developing awareness of the implications uncovered by quantum physics of the impermanency of matter and the probable existence of other dimensions, that artists should explore the idea of realms beyond our immediate consciousness, whilst at the same time under the influence of Darwinian science, draw on rational ideas. This mode of working allows the viewer a special intimacy with the artist, for drawings which are projections of the future or of other worlds must also by their very nature psychoanalyse the artist. The visual images produced are as much an illustration of internal worlds as a speculation on external worlds.