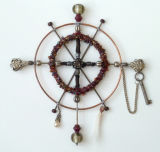 The disapearance of Carla Markham

I had known that my cousin Carla’s marriage was an unhappy one, and so therefore it did not come as a surprise to me when she announced her divorce. As Carla was childless and without familial responsibilities I was also not surprised when she e-mailed to say that she planned to emigrate to New Zealand to make a fresh start. She told me that she already had a job lined up and was excited about her future prospects, but that she desperately needed to see me before her departure. One week before Carla left I drove over to her home in Retford, the house had been sold and the majority of Carla’s possessions packed or disposed of. We sat in the garden chatting for a while until Carla suddenly became very serious and asked me if I would do something to help her.
Carla explained that some time ago she had gone to visit a friend who had been studying to become a hypnotherapist. During the course of the conversation Carla had questioned her friend about past life regression, a subject which had always interested her. The friend was reluctant to talk about it at first saying that it was a very controversial technique. After a while however, Carla had persuaded her friend to attempt to regress her. The attempt had been a successful and Carla had had a very vivid experience in which she was located not in another time or place but in a totally different world. She then described how she had been approached by a child who had given her a strange compass like object which the child had described as a ‘talisman’. The child had entreated her to ‘follow the talisman’. At that point Carla’s friend had bought her out of the hypnotic trance.
Later, approaching her own front door, Carla had reached into her shoulder bag to find her house keys, and to her astonishment had found the talisman just as she had visualised it in her trance.
Carla had clearly been very disturbed by the experience and was ashen faced after telling her story. As she had begun the conversation by asking me to help her, I asked what I could do. She picked up a plastic carrier bag from beside the bench on which we were seated and drew out a parcel which she then unwrapped. As she folded back the paper I saw that the parcel contained a strange object. It was the talisman –the talisman from the other world. Carla wanted me to look after the talisman until she was settled in New Zealand, then to send it on to her. I agreed to do so, but made her promise to get in touch as soon as she arrived in Christchurch, where she planned to settle.
That was ten months ago, and I have still not heard from Carla. The address which she gave to me proved to be false, and all attempts to trace her have failed.